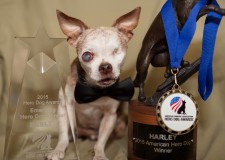 Harley, the tiny one-eyed Hero Dog passed away three months ago, but his legacy lives on and his presence is stronger than ever. A celebration of Harley's life, a memorial event, will be this Friday, June 24 in his hometown of Berthoud, Colorado. Hundreds of adoring fans are expected to attend. The following day, thousands of Harley fans will be attending Harley's annual signature event, Hops and Harley, also in Berthoud, CO.

Berthoud, Colorado, June 22, 2016 (Newswire.com) - The life and times of “Harley Freight Train Taylor” will be celebrated this Friday from 4pm until 7pm at Grace Place, 375 Meadowlark Drive, Berthoud, CO. Theresa Strader, National Mill Dog Rescue founder, will be speaking during the event, as well as Dan & Rudi Taylor and a “surprise” guest. Many of Harley’s belongings will be on display, including sweaters, collars, blankets, toys, awards, artwork and more.

'Hops and Harley' will be larger than ever this year, even though the tiny Chihuahua that inspired the event has passed away. For the 4th year in a row, on Saturday, June 25th, City Star Brewing of Berthoud, Colorado plans to raise much-needed funds for National Mill Dog Rescue, to help save and care for puppy mill survivors. This craft beer, dog-friendly, family fun event will take place in Fickel Park in downtown Berthoud from 11am until 6pm. Included with be live music, food trucks, vendors, activities for children and dogs .. and lots of fun. Thousands of people from all over the country are expected to attend. Learn more at www.hopsandharley.com

Harley was a truly remarkable little dog. He personified the forgiving and resilient spirit that we all love so much about dogs. He fought a host of medical conditions like a champion, allowing him to enjoy years of comfort and happiness. With great courage, he shed the horrors of his dreadful past to become a beloved member of the Taylor family. He was a fighter in every sense of the word until his very last day, when he gracefully let go to make his journey to the Bridge.

Harley’s life was truly a rags to riches story. After spending 10 years in a small cage he was freed and found a loving home where he began his triumphant journey. Harley’s efforts as a 'spokesdog' against puppy mills earned him the top honor as American Humane Association’s “Hero Dog of the Year” last September. He received the award during a red carpet, star-studded gala in Beverly Hills. Since then, Harley’s been on The Today Show, HuffpostLIVE, Hallmark Channel’s Home and Family Show and numerous news segments. He also had the opportunity to testify during a congressional caucus on Capitol Hill in Washington, DC. Sadly, Harley passed way on March 20th of this year, but his legacy lives on ... his mission will continue until puppy mills no longer exist. Learn more about Harley on his website: www.harleypuppymilldog.com​