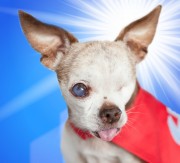 Harley, a puppy mill survivor, is asking for a meeting with the President. Harley will be in Washington, DC on October 21, 2015 to attend a Congressional Briefing with the American Humane Association where he will be lobbying congress in hopes of helping those still in puppy mills. Watch Harley's YouTube video, "Dear Mr. President - A Letter from a Puppy Mill Dog."

Berthoud, Colorado, October 14, 2015 (Newswire.com) - Harley, a tiny Chihuahua who spent the first 10 years of his life living in a small cage in a puppy mill, is known worldwide as "A Little Dog with a Big Dream." That dream is to create awareness about, and to hopefully bring an end to, the cruel commercial dog breeding industry.  Harley was recently recognized as the 2015 "American Hero Dog" by the American Humane Association last month in Beverly Hills.

This little 6-pound Chihuahua is on a mission!  Harley is hoping to garner attention from active legislators, Congressional leaders, and President Obama prior to his visit to Washington DC for a Congressional Briefing on October 21.  Harley is requesting this meeting through his YouTube video, “Dear Mr. President - A Letter from a Puppy Mill Dog." Watch it here: https://youtu.be/BcmdP1HFLlI

"Ten years in hell did not break Harley's indomitable spirit. Harley has taught me the deepest meaning of resilience and forgiveness. 'The Little Dog with a Big Dream' has allowed me to help be his voice in an effort to bring about change for the hundreds of thousands of dogs still living in puppy mills."

What is a Puppy Mill?
A puppy mill is a large scale commercial dog breeding operation where dogs live in cages and are bred repeatedly, producing puppies to be sold in pet stores across the country and online.  When the dogs are "used up" and can no longer produce puppies, they are disposed of, often at only 5-6 years of age. There may be as few as 100 breeding dogs or as many as 1,000 breeding dogs housed at a single facility. It is estimated there are approximately 10,000 puppy mills in the USA. Most of the dogs live in deplorable conditions - in tiny wire cages, stacked one on top of another, in buildings and barns which often have no heating or cooling. The dogs are not socialized, they receive little or no veterinary care, they do not have beds or toys, and they never get to run or play in the grass – some dogs never even see the sunlight. And though they yearn for it, they never receive love.

About Harley
After spending 10 years living in a cramped, filthy cage in a puppy mill, where he'd lost an eye when his cage was power-washed, Harley was on the brink of death when he was finally freed. He immediately received much-needed medical care and found love with a special family. He began to thrive.

To the surprise of the veterinary community, 4 years later, this strong-spirited little 6-pound Chihuahua is still going strong in spite of medical conditions caused from his years living in a cage. Harley works hard educating children and adults alike about puppy mills. His campaign, ‘Harley to the Rescue,’ has raised more than $500,000 and Harley has personally participated in the freeing of more than 500 dogs from puppy mills across the Midwest.

At 14 years old, Harley seems well aware that his life has a purpose. Whether it be a fundraiser in his honor that draws close to 2,000 people, or visiting an elementary school classroom to educate our youngest generation about where pet store puppies really come from, Harley’s magical personality grasps the hearts of all who meet him.

This little one-eyed dog is known worldwide. Harley inspires hope and confidence in people of all ages and in all walks of life who are able to relate to his less-than-perfect appearance and his approachable, down-to-earth nature. He’s been featured on the cover of popular magazines and on television and radio, and he is considered a social media sensation.

Dan Taylor, Harley's 'dad' had this to say about Harley, “Ten years in hell did not break Harley's indomitable spirit. Harley has taught me the deepest meaning of resilience and forgiveness. 'The Little Dog with a Big Dream' has allowed me to help be his voice in an effort to bring about change for the hundreds of thousands of dogs still living in puppy mills."

According to the American Humane Association, “Heroes are not judged merely by their size, but by the size of their hearts. Following more than a million votes by the American public and the opinions of an expert panel of celebrity animal lovers and dog experts, a tiny Chihuahua named Harley from Berthoud, Colorado has been named this year's most courageous canine and biggest dog star, beating out 170 other heroic hounds and capturing the top title of 'American Hero Dog' at the 2015 American Humane Association Hero Dog Awards®, presented by the Lois Pope LIFE Foundation, Inc. and broadcast nationally on Hallmark Channel October 30."

Harley will be on the Today Show on October 26th and HuffPost LIVE on October 27th.  He is available for personal appearances and interviews.